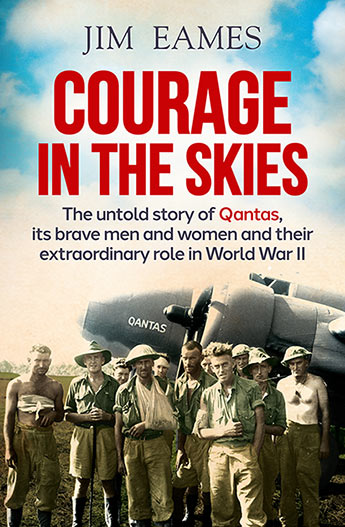 It tells the story of the role of Qantas as a front line airline in WW II, the achievements and losses and how close it came to disaster with the loss of most of its fleet.

Born in Albury, NSW Jim Eames began a long and successful career as a police reporter and aviation writer for the Melbourne Herald and weekly Times. In the 1960s, Jim was the editor for Herald in Papua New Guinea. When he returned to Australia Jim worked as the assistant director of Public Relations in the Department of Civil Aviation. He also provided his service to the Gorton and Whitlam government as the Press Secretary Minister for Civil Aviation and Aviation Adviser for the Minister for Transport respectively. In 1975, he was appointed as the Chief Press Officer for Qantas and later on as the Director of Public Affairs. Jim is also a highly regarded aviation historian who is the author of 8 books including Courage in the Skies, which captures the untold story of Qantas, its brave men and women and their extraordinary role in World War II.